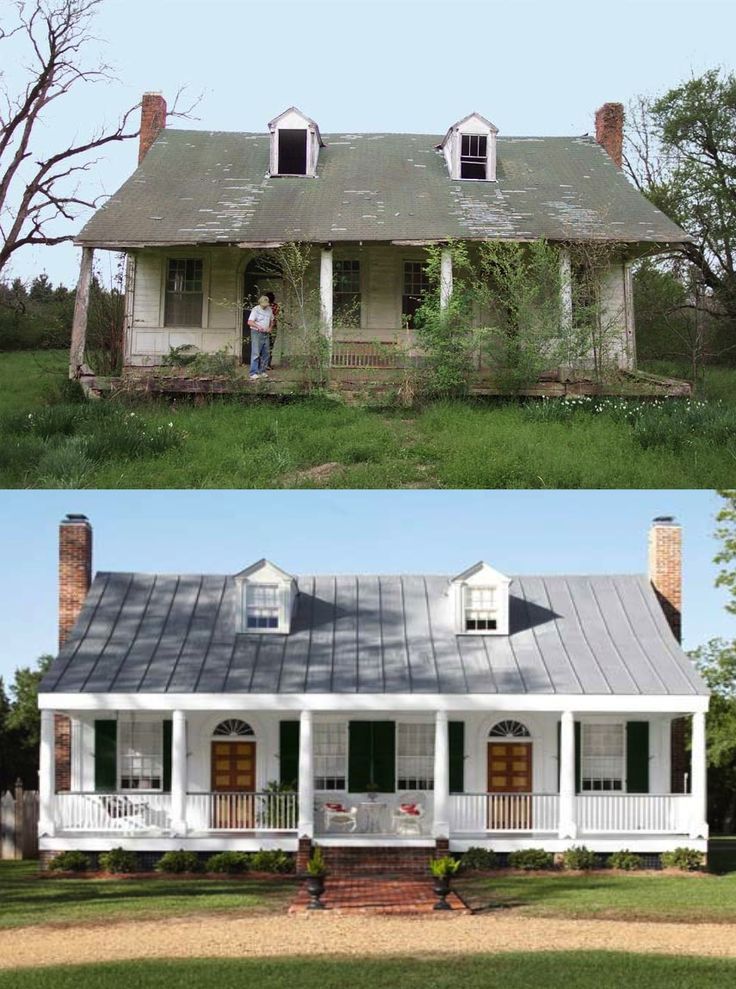 Those who live or have travelled to America will surely have seen the most distinctive form of houses in Victorian style. Victorian home restoration is here as a service at Montclair Roofing & Contracting, to reveal the small treasures of these houses. We are talking about Victorian buildings next to each other with the trademarks of bricks on the facade.

Many of them carry inside… their distressed past with the usually wooden surfaces, floors and ceiling, not being in their best condition. Most Victorian properties have the above problems, but with a renovation they can become unrecognizable.

With the Victorian house restoration, the dark old environment changes completely and acquires both light and personality. The walls of the old house are torn down, the original windows can be kept or changed and objects reminiscent of the Victorian era are placed in their proper place.

What is American Victorian architecture?

Victorian architecture in America is not just one style, but a collection of many designs, each with its own unique range of features. The Victorian era is a time period that marks the Queen Victoria era of England from 1837 to 1901. It is an era that became the style, and here are some of the most popular house styles – collectively known as Victorian architecture.

The stunning builders of the stunning Victorian houses were born raised during the time of the Industrial Revolution. These designers learned to use and incorporate new materials and technologies to create homes like no one had ever seen before. Mass production and mass transportation (the railway system) made decorative architectural elements and metal parts accessible. Victorian architects and builders applied decor generously, combining features borrowed from many different eras with flourishing from their own imagination.

If you look at a house built during the Victorian era, you can see gables characteristic of the Greek Renaissance or railings moved by a Beaux Arts style. You can see the lofts and other Colonial Revival details. You can also see medieval ideas such as gothic windows and exposed grids. Of course, you will find many studs, spindles, scrollwork and other characteristic building parts. Victorian-era architecture was the symbol of new American ingenuity and prosperity.

How did the Victorian style in homes evolved?

Let us see the evolution of the beautiful houses with the front porch, the stunning windows, the high ceilings, the extravagant dining room and the imposing front door. Their history is quite intriguing and even if you do not live in a Victorian old house, you might want to get one!

In the 1840s, when the Victorian era was just getting ready, Italian style houses became the hot new trend. The style quickly spread throughout the United States. Through widely published Victorian pattern books, many of which are still available in reprints. With low roofs, large cornices and decorative brackets, Victorian Italian homes suggest an Italian Renaissance villa. Some even had a romantic dome on the roof.

Medieval architecture and the great cathedrals of the Gothic era inspired all kinds of blooms during the Victorian era. The builders of the era, gave the houses distinctive arches, pointed diamond-shaped windows which were a prominent characteristic of the era, and many other stylish details which were borrowed from the Middle Ages. Diagonal window, as seen here in the 1855 Pendleton House, are typical 17th century post Medieval English (or Early Period) homes built by English settlers.

How to restore Victorian woodwork Montclair

A number of the Victorian Gothic Revival homes are practically large stone buildings which resemble  tiny medieval castles. Others are attributed to wood and have their own charm. The small wooden houses with the characteristic Gothic Revival is called Carpenter Gothic and is very popular even today in Victorian home restoration projects.

Rounded towers, gables, and expansive terraces give Queen Anne architectural royal winds. But the style has nothing to do with British rights and Queen Anne homes do not look like buildings from the medieval times of English Queen Anne. Instead, Queen Anne architecture expresses the enthusiasm and ingenuity of industrial-era builders. Study the style and you will discover many different sub-genres, which proves that there is no end to the variety of the Victorian Queen Anne styles in houses restoration.

Victorian folklore is a general, popular Victorian style. The builders added shafts or gothic windows with simple square and L-shaped buildings. A creative carpenter with a recently invented puzzle may have created intricate finishes, but look beyond the fancy dress and you will see a non-nonsense farmhouse out there in architectural detail.

Often, built in coastal areas, pebble-style houses are chatty and austere. But the simplicity of the style is misleading. The wealthy used these large, informal homes for luxury cottages. Surprisingly, a pebble style house is not always framed with pebbles!

Stick style homes has, as the name suggests, decoration with ornate stick-work and half timbering. Vertical, horizontal and diagonal panels create elaborate designs on the facade. But if we look past these surface details, a house style stick is relatively simple. Stick Style homes do not have large windows or fancy ornaments.

At first glance, maybe a Second Empire house was wrong for an Italianate. Both have a somewhat boxy shape. But a Second Empire house will always have a large attic roof installation. Architecture in Paris inspired this style during the reign of Napoleon III. People also know it as the loft style in Victorian home restoration.

Romanesque Revival styles (rusticated stone with rough surfaces) look like small castles with their turrets corner and locating arches. Often used for large public buildings such as libraries and courthouses. 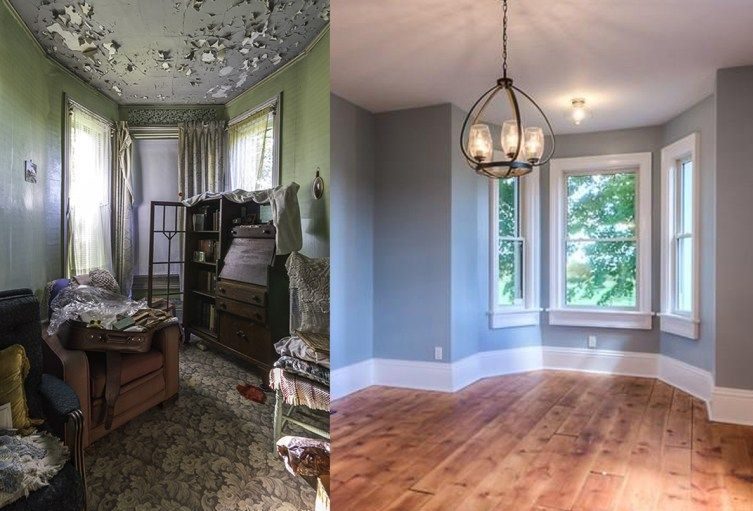 We find the intricate shafts and buttons in so many Victorian houses. Especially the Queen Anne houses, that the decorative furniture of the English designer Charles Eastlake (1836-1906) inspired. When we say an Eastlake house, we are usually describing the intricate, fancy details that we find in a number of Victorian styles. Eastlake style is a bright and airy aesthetics of furniture and architecture used in restoration of Victorian-style houses.

In the mid-1800s, innovative builders experimented with eight-sided houses. The thought behind this design was a belief more light and ventilation were healthier in smoky, industrial America. In addition to having eight sides, typical features include the use of quoins to emphasize the many corners and a dome on a flat roof.

Octagon houses are rare and not always made with local stones. The few that remain are wonderful reminders of the Victorian era, ingenuity and architectural variety.

Before and after Victorian house renovation Montclair

The aim of the design is to strengthen the relationship with the garden, to highlight the characteristics of the space. The new design brought natural light to the dark interiors.

We removed the excessive decorative elements for the Victorian home restoration, added over the years by the various owners. That gave a modern aesthetic to the interior of the Victorian styled houses.

The architectural intervention was located mainly in the design of new elements in the entrance area of ​​the house.

A special construction, it functions as a planter, inspired by the old pots of exotic plants “Wardian cases”, art surface, shelves and seat. This creates a sequence with visual continuity from the outdoor gardens with the plants to the home environment with the objects.

All new elements are white, to compensate for the strong contrast with the preserved marble floor.

The kitchen was previously hidden behind a heavy marble staircase, which was replaced with a new metal construction. The elevated space above the kitchen was converted into an office and a guest house.

The divider provides privacy when there are guests. It also allows light to penetrate, while when used as an office the divider folds, allowing the view to the garden.

The colour in the living room changed to focus attention on historical elements and to create a dialogue with the warmer tones of the furniture. We restored the existing floor with a new one.

The fireplace was redesigned, giving a more modern aesthetic to the living room. In private spaces, the bedroom, living room and bathroom used softer shades in a play of texture and depth.

Why choose us for a Victorian home restoration?

Our company, Montclair Roofing and Contracting has the experience to redesign and restore the interior of a house in Victorian style.

Montclair Roofing services and Contracting provides residential roofing and commercial roofing throughout Montclair, NJ and the surrounding areas. Family owned and operated, with over 30 years of experience in the industry. You can trust us to modernizing a Victorian old house in Montclair, New Jersey.

Furthermore, apart from the restoration of old houses, we also undertake roofing projects, bathroom and kitchen remodelling, painting projects and many more!

If you happen to own one beautiful old house with Victorian style or accents, you need to call Montclair Roofing and Contracting to get a free estimate. We are going to undertake the project of restoring your Victorian property and transform it by keeping its original Victorian-era character.

Make your old house new again by trusting our company!